Driving is a dangerous and sometimes expensive adventure. If you’ve been in a auto accident in St. Louis or anywhere with crazy roads, you probably know what a hassle the entire process can be. From calling insurance companies, to dealing with premiums, to hiring a great auto accident lawyer in St. Louis, auto accidents aren’t any fun – even if you escape injury.

Next time you worry about an auto accident try to remember, at least you weren’t in one of these super expensive crashes. 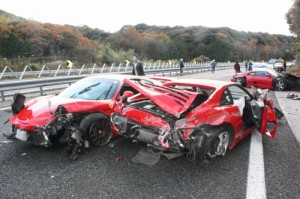 $4 Million in Damages After 13 Car Pileup
A 13-car pileup in Japan is touted as the world’s most expensive car accident – in terms of dollars.

The accident happened in December of 2011, when convoys of luxury Ferraris were driving on a Japanese freeway. The lead car lost control, and the nine cars behind him failed to stop in time. Three other cars were also involved in the crash. Police alleged that all of the drivers in the convoy were speeding and were not paying proper attention to the road. The pileup caused $4 million in damages. Miraculously, there were no serious injuries after the crash.

Crash of a $1.7 Million Car
An Aston Martin One-77 is an exceptionally rare car, with just 77 vehicles ever produced. The count is now down to 76; one of the units was involved in a high speed crash in Hong Kong in May of 2012. The details of the accident are hazy, but reports suggest that only the One-77 was involved in the crash, and that it was driven at a high rate of speed.

The owner’s name has also been withheld, however he was a businessman from mainland China. The car is worth $1.7 million. It had to be shipped back to Britain to have the damage properly assessed. Including shipping and the work that needs to be done, damage was estimated at around $2 million.

Hilton was found to be at fault for the accident, however, her insurance company refused to pay out, claiming her policy did not cover the amount being sought. A lawsuit was filed seeking damages of $250,000 per individual involved in the accident. Settlements were privately reached. If each person involved was given the $250,000 in damages they were seeking the accident would be one of the most expensive in recent history, topping $2 million.

100 Car Pileup Leaves Insurance Companies Paying Out Millions
In March of 2014 a chain reaction accident involved more than 100 cars on Interstate 25 near Denver, Colorado. The accident was caused, in part, by bad road conditions. It is believed that several individuals spun out on slick roads, causing a chain reaction.

One person was killed in the accident and many more were injured. Trucks, passenger cars and 18-wheelers were among the cars damaged in the accident. While estimates for the damage caused by the accident are not yet available, insurance companies expect the total to top over $1 million when all is resolved.